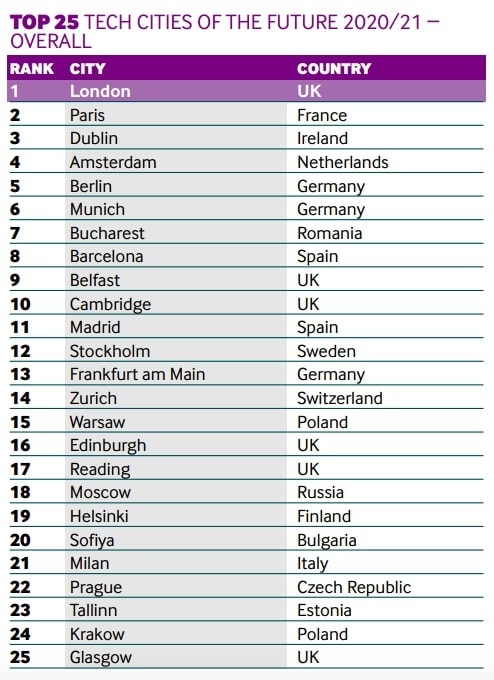 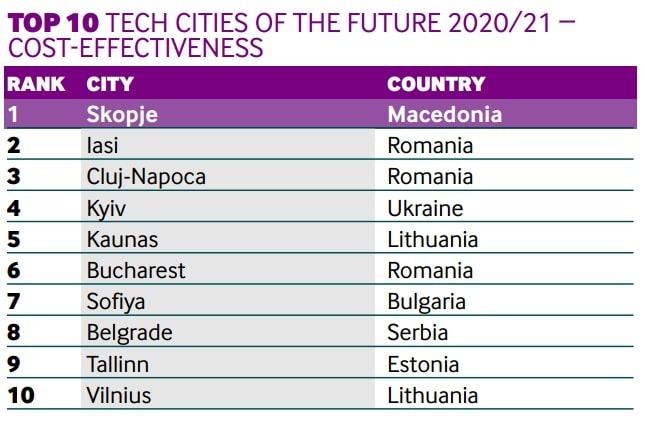 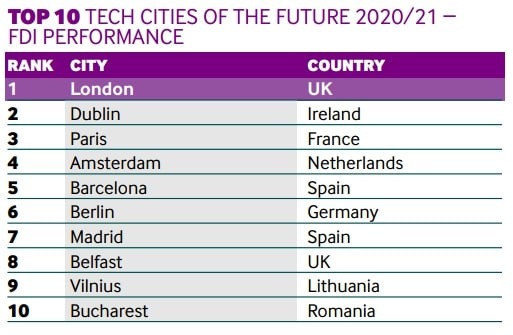 The Romanian and Bulgarian capital cities make it to the top 25 among nearly 80 locations in the new ranking Cities of Future 2020/21 published by Financial Times Intelligence Division fDi and digital business media The Next Web. The report collects “tech cities, part of a long list of technology hotspots that are home to – and seek to attract – innovative companies of any size to their streets”. In this list led by London, Paris and Dublin, Bucharest lands on the 7th position, and Sofia ranks 20th.

The first edition of Tech Cities of the Future ranking aims to identify the European cities with the most promising prospects for startups, tech, and innovation investment. The performance of the cities is based on data collected for 76 locations, under five categories: Economic Potential, Innovation and Attractiveness, Foreign Direct Investment (FDI) Performance, Cost-Effectiveness, and Startup Environment.

City policies and governmental engagement are also part of the factors taken into account. Successful tech cities are the result of a coordinated government strategy aimed at developing a globally connected and supportive community that fosters collaboration, innovation, and entrepreneurship, reads the report. And although Sofia is not in the top 10 performers when it comes to FDI strategy (it ranks 17th), the city has it’s digitalization and innovation strategy that was presented in 2019 and was admitted by the city council in Spring 2020. “We believe that another inclusion of Sofia in a prestigious international ranking is of great importance for the positive image of the city and its strong position on the global map of innovation, technology and business hubs,” says the management team of Sofia Investment Agency.

The UK capital London is not surprisingly taking first place in five out of six categories. Between 2015 and 2019, FDI in the software and IT services and communications sectors made up about 50% of London’s total foreign investments with brands like Huawei Technologies, Facebook and Robert Bosch, but also smaller startups such as Chainalysis and Lilium Aviation, coming to the city to launch operations. According to data, London produces more unicorns than any other European city being home to companies such as Monzo, Revolut, Deliveroo, and Farfetch. In regards to the startup environment, the UK capital boasts more than 70K companies in the software and IT services, 5K in communications, and almost 4K in research and development. With an average of ˆ11M for Series A VC rounds, London presents to startups also great access to capital.

SEE and the cost-effective cities of the future

In the top tens by FDI performance, overall economic potential, startup environment, innovation and attractiveness, there’s rarely a Southeastern European city. Indeed, only Romanian capital Bucharest makes it to the 10th position in the FDI performance ranking. Yet, there’s one category dominated by SEE cities.

It may not come as a huge surprise that the tech cities in SEE are cost-effective. This, however, could play a pivotal role for international brands and local economies, as many companies are now cutting costs and looking for more cost-effective R&D destinations. In the ranking, there’s also a top ten of the hubs that fit into these criteria with Macedonia, Romania, Bulgaria, and Serbia taking six of these positions. Last year, Sofia was also ranked number three by cost-effectiveness fintech destination.

Still, a lot of work to improve digitalization and startup environment

When it comes to the startup environment Bulgaria and Romania have a long way to go even though the cities are becoming more and more vibrant innovation hubs in the past six-seven years. In the latest StartupBlink report exploring the innovation ecosystems in 100 countries and 1000 cities, Bulgaria ranked 32th moving three positions upwards, and Romania experienced a drop with 7 positions last year. In the city ranking, the capital Sofia is positioned under number 86, just behind Frankfurt and Vienna and is 29th in Europe, and Bucharest land on the 103rd place.

The algorithm that ranks the locations takes into account a geographic crowdsourced database of tens of thousands of startups, accelerators, and coworking spaces, among other entities.

In regards to digitalization, the two countries have also shown there’s space for improvement. In the latest Digital Economy and Society Index (DESI) report, annually compiled by the European Commission, Bulgaria and Romania, together with Italy and Greece, show the lowest results when it comes to overall internet connectivity, digital skills, use of internet services (especially for conducting business), integration of digital technology in the business, and e-government.

Take a closer look at all of Luximmo's offers in Sofia!